Archaia Epidavros, or as it was called before: Palea Epidavros, is a small fishing village at the eastcoast of the Peloponnese.
Between the orange and olive groves at the foot of the mountains, with two large bays at the Saronic Gulf, Epidavros is an oasis in Argolida.

During the Mycenean period Epidavros was a large kingdom with a population of 80.000.
We know, from `Homer`, that Epidavros was able to supply 25 ships for the Trojan war, as far back as 1184 B.C..During this period Epidavros was the most important harbour in the Peloponnesus, thanks to its strategic position to Athens, Argos, Corinth, Aegina, Nafplion and Troizin.
The city had two natural harbours: the northern, military harbour, and the southern trade harbour. The remains of amphorae for the storage of oil and wine can still be found on the sea floor. The surrounding countryside is now coloured bright with orange trees, whereas long ago the valley and hillsides were full of vineyards.

Lying between the two bays is Nisaki, a small island which was the city’s Acropolis, where the ancient temples and public buildings stood. The only surviving architecture on the island is the small theatre, embedded in the hillside like a shell. It was at this theatre that ceremonies were held, such as those in honour of Dionysus, god of wine and the spirit of life. The theatre, with its 18 rows of seating, was built in the 4th century B.C., and was excavated in 1972. It has been the venue for a summer music festival since 1995. Every weekend in July a very varied programme of concerts is on offer, for instance: Dalares, Maria Farandouri or classical music.

A walk through the village streets leads you past Mycenaean burial monuments, and at the top of mount Katarahi are the remains of the Temple of Artemis.
Archaia Epidavros is now a fishing village, with a population of 2000. In the spring and autumn the village is filled with the scent of orangeblossom, while in the summer the village bustles with tourists, mostly Athenians seeking refuge from the heat of the city, and also foreigners interested in art and culture. Tourists often return to Epidavros year after year to enjoy a holiday of specific interest, such as sailing, theatre or paragliding. Numerous beaches provide a welcome relief from the heat, the annual summer market offers a taste of the local produce and the famous Greek hospitality ensures that one can quickly relax and enjoy life in Archaia Epidavros.
You fly to Athens airport. From there it is only 1 hour and 50 minutes by car on a very good highway.

Argolida
The weather in Argolida (Argolis), Peloponnese, Greece is fairly mild all year round, contributing to its popularity as an all-year-round holiday destination.
The summer weather in Argolida is extremely pleasant, sunny and cool, while the winter weather is temperate, with infrequent rain.
The seasidevillage of Epidavros has ideal weather, particularly during the summer, as the breeze comes from the sea.
Argolida has many ancient sites, monasteries, churches, islands and with the orange-, olive- and pine trees, an evergreen nature.

What to do in Epidavros?
Concerts in the smalll theatre of Epidavros in July.
The local agricultural market in July.
Theatre performances in the theatre of Epidavros in July and August.
Byzantine churches with old icons.
An open-air disco.
Boattrips and diving.
Walks to the ancient ruins of the tempel of Artemis and Mycenaean graves.
Picking herbs and wild vegetables in winter and spring.
A cosy harbour with lots of restaurants and hotels.
Several beaches with shadow.
Trips to many archeological sites like Mycene, Tirynthia, Korinthia, Nemea and the beautiful city of Nafplio, all within an hour drive. 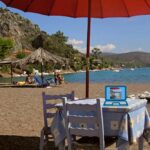